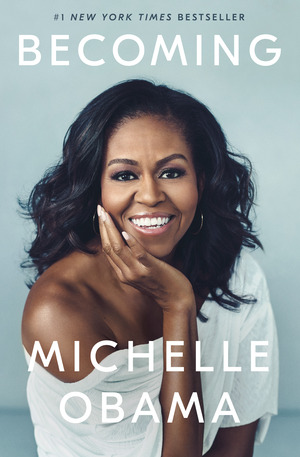 “I’m an ordinary person who found herself on an extraordinary journey. In sharing my story, I hope to help create space for other stories and other voices, to widen the pathway for who belongs and why.”
—MICHELLE OBAMA

1. Mrs. Obama begins her book with a story about making cheese toast on a quiet night at home, a few months after leaving the White House. Why do you think she chose this story to begin her memoir?

2. Mrs. Robinson is the opposite of a helicopter parent. She was tough and had very high expectations for her children, and she also expected them to figure some things out on their own and learn from their missteps and the process of making choices. She gave her children agency at a very young age. How did that shape Mrs. Obama? What is the balance between discipline and trust?

3. In Becoming, we get to know the constellation of Mrs. Obama’s extended family through her eyes. Her grandfather, Southside filled his house with music and makeshift speakers and merriment. Years later, Mrs. Obama would fill the White House with music and culture through live performances and several programs aimed at children. How do those kinds of early memories leave an imprint on us as we grow older? What were the sights and smells that you remember from visiting grandparents or other elders, and how have they left a mark on you?

4. In discussing her neighborhood on the South Side of Chicago, Mrs. Obama writes, “Failure is a feeling long before it becomes an actual result. It’s vulnerability that breeds with self-doubt and then is escalated, often deliberately, by fear.” How did this insight shape Mrs. Obama’s work and mission as First Lady? What can we all do—as individuals, parents, and community members—to help break this cycle?”

5. Mrs. Obama writes about the early influences of her mother, Marion Robinson, and her TV role model Mary Tyler Moore. One was a single, professional living on her own in the big city. One was a wise and supportive stay-at-home mother, who later went to work to help pay for her children’s education. Where do you see the influences of both of these women in Mrs. Obama’s life?

6. Early in her senior year at Whitney Young High School, Mrs. Obama went for an obligatory first appointment with the school college counselor. Mrs. Obama was treasurer of the senior class. She had earned a spot in the National Honor Society. She was on track to graduate in the top 10 percent of her class and she was interested in joining her older brother, Craig, at Princeton University. The guidance counselor said to her, “I’m not sure that you’re Princeton material.” How did Mrs. Obama handle hearing that statement? How does one avoid having one’s dreams dislodged by someone else’s lower expectations?

8. In her early life Mrs. Obama writes about being a “box checker,” but as she gets older she learns how to “swerve” to adjust to life’s circumstances. What does it mean to swerve and how do we develop that skill in life?

9. In Becoming, Mrs. Obama describes a number of women who have served as mentors for her at different times in her life, including Czerny Brasuell, Valerie Jarrett, and Susan Sher. What do these women have in common? What lessons did Mrs. Obama learn from them about finding a fulfilling career as a parent? Who are your mentors and how do you cultivate those relationships?

10. In Chapter 15, Mrs. Obama explains why she chose to support her husband’s run for the presidency despite her misgivings about politics. What made her change her mind? Would you have made the same choice? How do you balance the competing worlds of family life and work in your life?

12. In Becoming, Mrs. Obama writes candidly about detractors who tried to invalidate her standing or her work. “I was female, black, and strong, which to certain people, maintaining a certain mind-set, translated only to ‘angry.’ It was another damaging cliché, one that’s been forever used to sweep minority women to the perimeter of every room, an unconscious signal not to listen to what we’ve got to say.” What is the root of that “angry black woman” cliché? How and why does it do damage?

14. In the epilogue, Mrs. Obama writes, “I’ve never been a fan of politics, and my experience over the last ten years has done little to change that.” Did you find her statement surprising? Do you think politics is an effective way to make social change?

15. Why do you think Michelle Obama chose to name her memoir Becoming? What does the idea of “becoming” mean to you?

1. Mrs. Obama writes that her parents talked to her and Craig like adults, “indulg[ing] every question we asked,” from juvenile complaints about breakfast to more serious topics like sex, drugs, and racism. How did Fraser and Marian Robinson’s parenting strategy influence Mrs. Obama later in life? Do you agree that parents should answer their children’s questions honestly, or do you think it’s better to shield them from the messiness of adult life?

2. Early in Mrs. Obama’s life, a young relative asks her, “How come you talk like a white girl?” Mrs. Obama came from a home where she was expected to be smart and to “own” her smartness and “inhabit it with pride” but lived in a neighborhood where “speaking a certain way—the ‘white’ way, as some would have it—was perceived as a betrayal . . . as somehow denying our culture.” What is it like to live straddled across different worlds? What is like to harbor ambitions that put you at odds with the community and the people you love and trust the most?

3. In thinking about the students who acted out in her second-grade classroom, Mrs. Obama writes, “Kids know at a very young age when they’re being devalued.” Is this a dynamic you’ve witnessed in your own community? How do you make the children in your life feel valued?

4. When Mrs. Obama’s friend Suzanne is diagnosed with terminal cancer, it destabilizes Mrs. Obama’s view of “the world as it should be.” How does Mrs. Obama cope with Suzanne’s death, and the death of her father the following year? How did these early experiences of loss shape her decision to step off the career path of a corporate lawyer?

5. As a young professional, Mrs. Obama seemingly had it all—a great job, a great wardrobe, and a clear path to great things in a top-notch Chicago law firm. But she writes, “In my blinding drive to excel, in my need to do things perfectly, I’d missed the signs and taken the wrong road.” She decides to change careers to focus on public service—a move that surprises some who were close to her. What is the value of listening to that little voice that suggests you might be on the wrong path even though the world thinks you are doing exactly the right thing? How do you support someone who decides to follow their own path or create a
new one?

6. In describing her relationship with her husband, Mrs. Obama writes, “Coexisting with Barack’s strong sense of purpose—sleeping in the same bed with it, sitting at the breakfast table with it—was something to which I had to adjust, not because he flaunted it, exactly, but because it was so alive.” How did this sense of purpose affect their life as a married couple? Do you have someone in your life who supports or shares your own sense of purpose?

7. Life on the campaign trail was a constant education for Mrs. Obama. Among the lessons was the power in people coming together to see her and to see each other eye to eye. “I’ve learned that it’s harder to hate up close.” How do we create spaces where people can come together to talk, listen, and share stories and ideals to build stronger communities, even when people might not agree or share the same history or perspective? How do we as a nation push back against cynicism and the “us vs. them” battles that so often divide us?

8. There is an oft-cited maxim in the black community: You’ve got to be twice as good to get half as far. Mrs. Obama said the First Family felt the weight of that statement when they moved into the White House. “Any error or lapse in judgment, we knew, would be magnified, read as something more than what it was.” What is the reality rooted in that twice as good/half as far maxim that so many parents pass on to their children? Why and how would that maxim feel familiar to some and surprising to others?

9. Mrs. Obama writes about the lives of people who influenced her world view as she entered her role as First Lady. How are we shaped by the role models in our histories? How do we bring our own histories, cultures and experiences into spaces where they have never existed?

10. When describing her visit to the Elizabeth Garrett Anderson School in London, Mrs. Obama finds herself experiencing “a strange, quiet revelation: They were me, as I’d once been. And I was them, as they could be.” What did it mean for the girls to see themselves in Mrs. Obama? Why does she feel such a connection to these girls, and to girls’ education more generally? How did she use her visibility as First Lady to bring attention to these issues?

11. In Chapter 23, when describing her visit to Harper High School, Mrs. Obama writes, “America is not a simple place. Its contradictions set me spinning.” How did these contradictions play out in the lives of the students at Harper? What are the barriers to ending gun violence in their community and throughout the country? After reading this chapter are you optimistic that these barriers can be surmounted?

12. Malia and Sasha Obama were young children when their father was elected president. How did the Obamas balance the need to protect their daughters’ safety with the desire to allow them to grow and become independent? How do you handle the pressures of the outside world with the children in your life?

13. Mrs. Obama writes about being “flung out of my world.” It is something she experienced time and time again, transferring to Whitney Young, moving to Princeton as one of the few African American students on campus, joining the juggernaut of a presidential campaign, and moving into the White House. She writes: “You don’t really know how attached you are until you move away, until you’ve experienced what it means to be dislodged, a cork floating on the ocean of another place.” What is the value of being flung out of one’s world? What do we learn about how Mrs. Obama handled transitions as she got older, wiser, and more experienced? What is the best advice for young people who find themselves in new or uncomfortable terrain?

14. Mrs. Obama has surrounded herself with a strong and supportive circle of friends from an early age. In some cases the circle was  within reach; as she got older and busier, she had to work harder to create and maintain her circle of support. She writes “Friendships between women, as any woman will tell you, are built of a thousand small kindnesses . . . swapped back and forth and over again.” How did she create the building blocks of strong friendships in her life? What is the value in creating and maintaining a circle of strength?

15. Mrs. Obama will always be remembered for her fabulous sense of style. Many of her fashion choices were strategic and she writes, “My clothes, I was learning, were an extension of my voice.” How did she speak to America and the world through what some call “fashion diplomacy”? How and when do you use clothing or accessories as an extension of your voice?